Perez, who started the race from third place, was the first person to come into the first pit stop at the front, gaining a big advantage. Perez, who took the lead after the pits, managed to keep his place in the remaining section. Perez thus achieves his third victory in Formula 1 after Sakhir in 2020 and Azerbaijan in 2021.

Carlos Sainz, who started the race from second place, remained on track, rejecting Ferrari’s insistent plea to switch to transition tires on the dry track. Sainz’s decision was the right one because when the track dries out too quickly, those who switched to transition tires early came to the pits for the dry tyres. Sainz went straight from his starting tires to dry-floor tyres, outpacing teammate Charles Leclerc. Sainz, who was behind Pitten Perez, didn’t have a chance to attack in the remaining section and finished the race in second place.

There was nothing in the air in the early hours of the Monaco GP day, which was expected to be rainy, but around race time it started to get dark and raindrops started to fall on the track about 10 minutes before the race.

After the rain arrived, the race direction suspended the race and increased the intensity of the rain during the waiting period.

With a delay of 16 minutes, the cars took to the track behind the safety car, but after 2 laps the red flags were raised and the race was suspended again.

After this break, a long waiting period began and at 5:05 p.m. the race resumed behind the safety car. After seeing that the track was safe, the safety car returned to the pits and the real racing began with a moving start.

Starting from pole position, Leclerc comfortably led the race. Behind him were Sainz, Perez, Verstappen and Norris. In the first part of the race on wet tires, Leclerc was quite strong and edged his nearest rival Sainz by around 5 seconds. Although there wasn’t much trouble up front, AlphaTauri rider Pierre Gasly, who pitted early and switched to green transition tyres, struggled to get back up.

As the rain subsided, everyone tried to calculate when the other would object. Those who came to the pits first opted for transition tires. The most important of these names was Perez. While the Red Bull driver was in 3rd place, he stopped on lap 17 and put on the transition tyres. Perez came back to the race in 5th place behind Norris and quickly started closing the gap. However, one lap later, when McLaren pitted Norris, Perez’s lane was cleared and as the track drying speed increased, Perez suddenly started doing fast laps around 4 seconds behind his opponents in front of him. .

Seeing this, Ferrari called Sainz into the pits, but Sainz said the track was drying out too quickly and he wanted to go straight to dry floor tyres. Ferrari and Red Bull pitted Leclerc in the lead and Verstappen in third on lap 19. Although Ferrari called Leclerc at the start, he later said to stay on the track, but it was too late as Leclerc was heading to the pits.

On lap 23, Ferrari and on lap 24 Red Bull pitted the two drivers for dry tyres. The winner of those stands was Perez, and the loser was Leclerc. After the switch to dry tyres, the standings were Perez, Sainz, Verstappen and Leclerc.

While the race was going well on dry ground, Haas rider Mick Schumacher crashed into the pool section after a while. When the rear of the Haas vehicle left the front, first the Virtual Safety Car, then the Safety Car entered the race, and finally the race was stopped with red flags.

Once the barriers were repaired, the race started again with a lively start. At the restart, the Red Bull drivers had medium tires and the Ferrari drivers had hard tyres. In the last section, the first 4 riders followed each other in about 1.5 seconds and the tension was at its highest level, but it was not possible to attack in the streets of Monte Carlo. 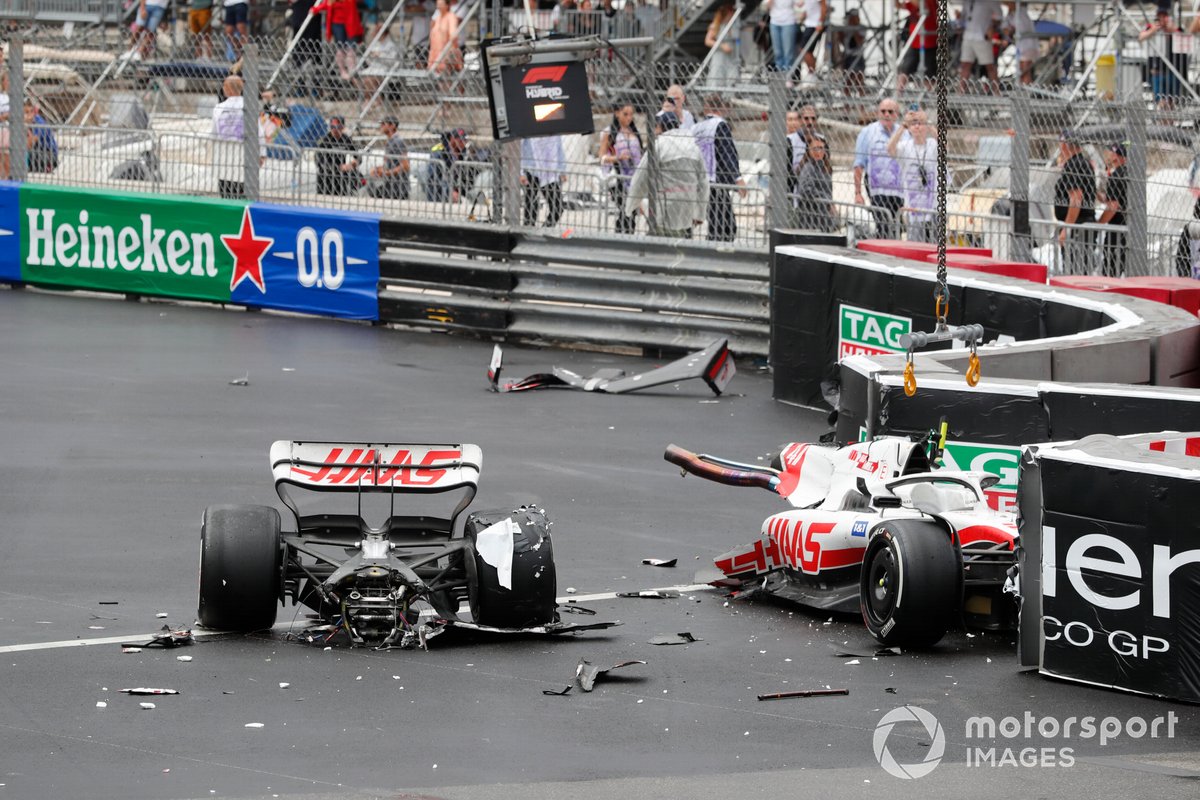 The winner of the race, which ended in 3 hours with breaks, was Red Bull driver Sergio Perez. Sainz finished the race in second place at the start, while Verstappen finished third and completed the podium.

Leclerc, who started the race from pole position, finished a Formula 1 race for the first time on home soil but was both victorious and on the podium.

Mercedes driver George Russell, who, like Sainz, went directly from a wet tire to a dry tire, was able to climb to the top of the intermediate group in 5th place.

McLaren driver Lando Norris, who was in 5th place both in qualifying and after the start, was one of the names who switched to transition tires and fell behind Russell in the process. Norris finished 6th, 0.263 seconds behind Russell. Norris set the fastest lap of the race.

Alpine rider Fernando Alonso was one of those who implemented Sainz’s strategy of switching directly from wet to dry tyres. In this way, Alonso was able to maintain his position. After Schumacher’s crash, Alonso, who was very slow from the lead riders, managed to keep Lewis Hamilton behind and finished the race in 7th place.

The Monaco GP did not go well for Mercedes champion Lewis Hamilton. Hamilton returned to the race behind Alpine’s Esteban Ocon after switching to transition tires on lap 15. While trying to pass the Ocon, Hamilton made contact and damaged his front wing. Hamilton, who moved up to 8th place after Ocon pitted, stayed behind Alonso in the final section but couldn’t pass him and finished the race in 8th place.

Esteban Ocon managed to see the checkered flag in 9th place but was given a 5 second penalty for causing an accident in his fight against Hamilton. After this penalty, Valtteri Bottas, Sebastian Vettel and Pierre Gasly gained one place each, while Ocon was out of the points pot. In this way, Bottas scored 9th, while Vettel took the last point 10th. 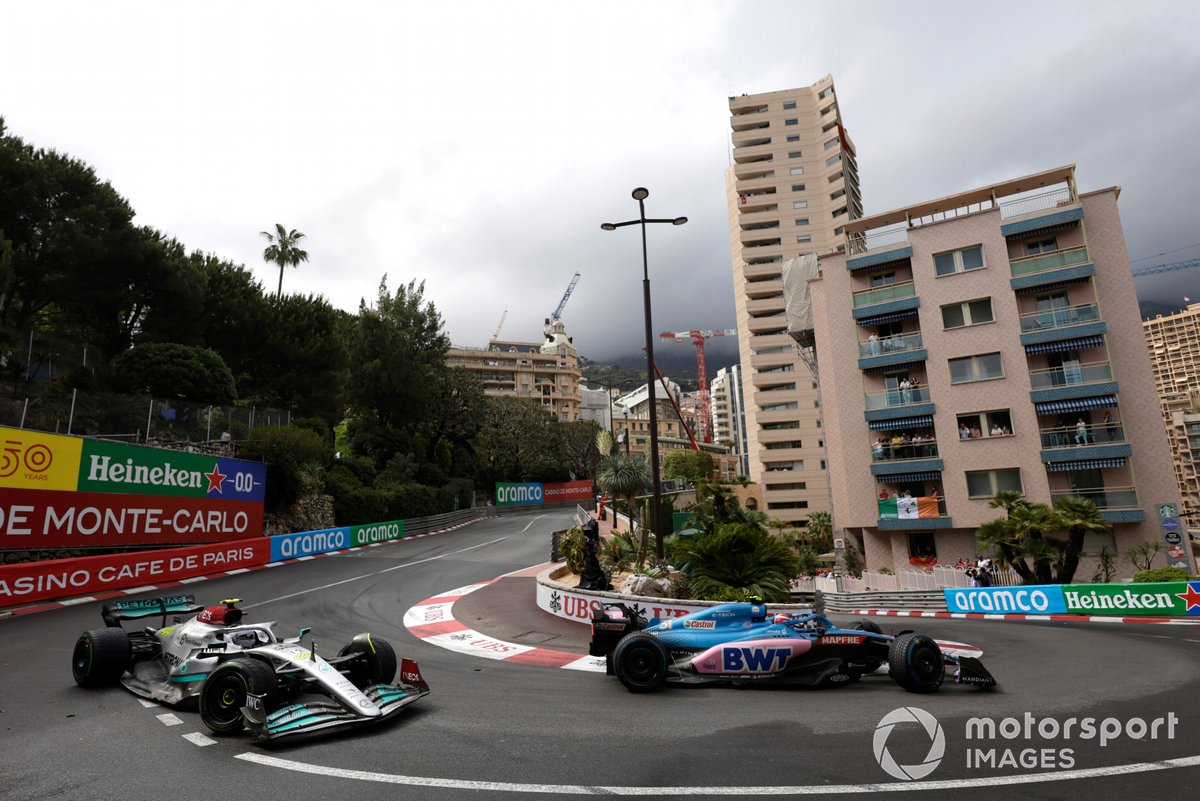 Gasly, who gained great appreciation with his transitions early in the race, was 11th behind Vettel and couldn’t score.

McLaren’s Daniel Ricciardo finished the race in 13th place, while Lance Stroll, who at the start of the race was behind the safety car, brushing against the barriers and bursting into the pits, was 14th.

Like Stroll, Williams driver Nicholas Latifi, who hit the barriers behind the safety car on the first lap but managed to continue, finished the race in 15th place. Guanyu Zhou and Yuki Tsunoda were the last to finish the race.

After the 7th race of the season in Monaco, Verstappen continues to lead the championship with 125 points, while Leclerc drops by 9 points. Perez, on the other hand, moved up to 110 points with his win and came very close to this fight up front.

In the Constructors’ Championship, Red Bull were 36 points ahead of the closest Ferrari on 235 points. While Mercedes is in 3rd place with 134 points, McLaren in 4th place has 59 points.

The Azerbaijan GP, ​​the 8th race of the season, will take place on June 12.

Ranking after the Monaco GP >>